* In case of any delay in receiving the OTP, you may verify it later. Please proceed without verification.

Your mobile number is not registered with us. Please register your mobile no.

Prior to the Independence of India Baran was a part of the Kota district of Rajasthan which again was a princely state in the western zone of the current India. Much of the culture and cuisine has been influenced by its erstwhile district. Baran was ruled by the Solanki Rajputs which was considered to be one of the most chivalrous warrior clan of Rajasthan. The district then covered the size of almost 12 villages which is also said to have inspired the name of the city as ‘Baran’, in which ‘Bara’ refers to the number 12

Like all other districts of Rajasthan, Baran too has a major contribution in popularizing the cuisine of the state. Since by now you must be aware of the fact that Rajasthani cuisine is really spicy but they also have certain desserts that taste like heaven. One such sweet dish is Ghevar! This dessert is specifically associated with the most popular Rajasthani festival-Teej. It makes use of very few and simple ingredients but the process to make this dish is a bit tricky. It is said to have originated from the district of Baran and was a favorite sweet dish of the Rajputs then.

The interesting thing about this delicacy is that it is purely vegetarian and can be made with different materials like Mawa, Malai, Maida etc. Each has a taste of its own, but I anyway had trouble mastering the plain or rather the most common version of the dessert.

But I still gave it a shot as I love sweets and ended up sharing its recipe and preparation method here.

Ingredients for the sugar syrup

Process of Making the sugar syrup

Pour the sugar in a pan and add water to it, place it on a very low flame and allow it to simmer for reaches a consistency of a string when lifted from the pan with a ladle. Please make sure that you do not touch the pan or the mixture at any point as it can cause a severe burn. Then remove it from the heat and ensure that it stays warm. If you like, you can make the syrup after you have prepared the Ghevar so that the sugar syrup does not cool down. 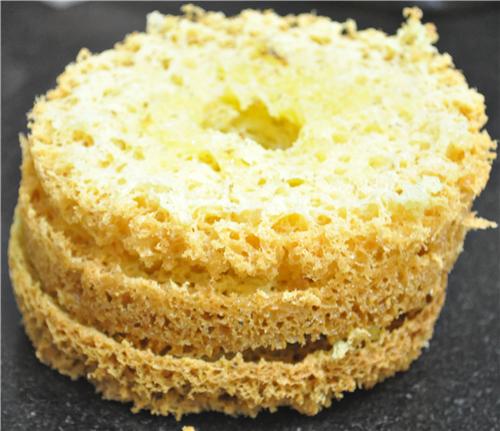 Process of Making Ghevar
Mix the flour or Maida, Corn flour and molten ghee in a deep bowl. Then add a cup of water slowly while folding the mixture and stirring continuously. This is to ensure that there are no lumps formed and jellies of Ghee are formed and the Ghee and water are not separated. Repeat the same process by adding 2 more cups of water making sure that the ghee and water should not separate any point.

The batter should not be too thick or too thin and should appear like layers. You can add  a little more water to get the necessary consistency. Keep aside the batter in a cool and dry place, do not refrigerate.
Get a Ghevar mold which you can buy from any utensils shop, in a wok or Kadhai. It looks like two concentric circles adjoined together with a hole in the middle and is hollow between the two circles wherein the batter can be poured. Now add molten ghee in the wok unit it reaches 3/4th of the height of the mold. Take up 2 ladles of the Ghevar batter and pour it into a small bowl, keeping it within the heat range of the gas oven.

On medium flame heat the ghee and pour in a spoonful of the batter into the mold following the gap between the inner and outer circles of the mold, in a thin stream and repeat the process when the froth subsides and the batter settles in the mold. You can also use another method, in case the mold is not convenient. Pour the batter in thin streams in the Ghee covering the centre and repeat this process seven times and make a hole in the centre with a rolling pin or wooden skewer. The batter needs to be poured in the centre each time. Increase the heat and let the Ghevar cook in the centre. Keep pouring spoonfuls of molten Ghee at the centre of the mold 2-3 times.

This sweet delicacy of Rajasthan is becoming increasingly popular across different states beyond Rajasthan which include Haryana, Uttar Pradesh, Gujarat, Delhi, Mumbai and even Madhya Pradesh. It is most often consumed and readily available in the market during the monsoon season, referred to as the month of ‘Saavan’ by us Hindus. So if you find the process of preparing Ghevar of too tedious, then simply purchase it from the markets of Baran.


Explore more about Cuisine in Baran